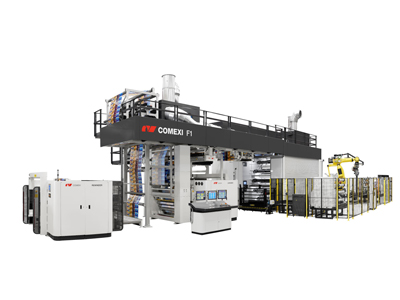 The robotic system was launched with the F1 at drupa 2016

Comexi and German flexo press manufacturer, Allstein, have reached a license agreement for the use of Comexi’s patent on robot technology for print sleeves, adaptors and anilox changes in flexographic presses.

The robotic arm system from Comexi was launched in at drupa 2016 to facilitate changeovers on its F1 range of presses. With the system, sleeves are handled automatically and the robot can prepare them offline in trolleys.

When first launched in 2016, the company stated, ‘Production can be increased by 25% with the robot managing changes automatically, significantly reducing changeover time.’