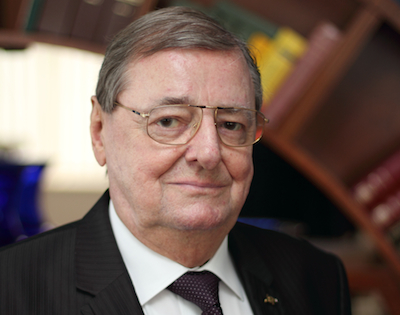 Gerhard Metz, founder of the IST METZ group, has died in Waren an der Müritz on 11 November following a short illness.

He knew almost every one of his 500 or so employees by name – the personal touch was always important to him. He and his wife Renate built up the company based in Nürtingen-Zizishausen, into a manufacturer of UV systems with international success.

In his birthplace of Mecklenburg-Vorpommern, he initially completed an apprenticeship as a fitter and then from 1953 onwards obtained three engineering qualifications at once and was one of the first engineers in the GDR to work on jet engines for planes. When the GDR scrapped its own aeroplane construction programme in early 1961, a move to the West was more than just a career issue for Gerhard Metz and his wife. Their escape to West Berlin shortly before the wall went up finally led the young family to Nürtingen, where Gerhard Metz once again found work as an engine test bench engineer.

His next stop was the appointment in 1966 to Hildebrand, a company based in Oberboihingen, where he initially worked as an assistant to the board and then as design manager and deputy managing director. It was here that Gerhard Metz developed the first systems for drying surface coatings using ultraviolet light. These systems were so successful that an independent company was founded with STG, initially under the management of Hildebrand and its partner Werner & Pfleiderer; Mr Metz finally took over completely when Hildebrand went into liquidation in 1982.

The UV drying systems business continued to grow steadily, with turnover and number of staff also rising in tandem. Mr Metz is considered a tireless pioneer of the UV sector, someone with key involvement in ensuring the successful establishment of this technology. The group now comprises 16 companies, including subsidiaries all over the world.

In 2000, he was awarded the Wirtschaftsmedaille, a medal in recognition of his services to commerce in the Baden-Württemberg region. In 2001, he received further acknowledgement of his life’s work when he was appointed honorary president of the surface treatment technology section of the Verband Deutscher Maschinen- und Anlagenbau e.V. (German Engineering Association, VDMA).

After retiring from business operations, the Mr Metz originally moved to Lake Tegernsee in Upper Bavaria, but later returned to their home in Waren an der Müritz. Gerhard Metz continued to maintain links with Nürtingen, regularly visiting IST METZ GmbH to keep up with events in the company and to meet his friends.